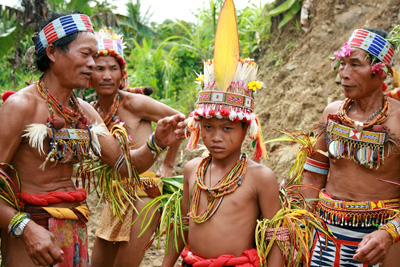 The Mentawai Islands are part of West Sumatra Province and become one of the most interesting tourist spots in Indonesia. Apart from its beautiful beaches, visitors come to the location to meet an indigenous tribe of Mentawai. The locals indeed live a traditional life and conduct unique cultures, which tourists can learn. The thing is some of them have developed a more modern way of living. Despite the fact, many of the locals still retain their culture and live in different parts of the islands. No wonder, they become one of the reasons why tourists would like to visit Mentawai.

The Nuance
One thing that tourists can be sure of is that Mentawai Tribe doesn’t apply any modern culture and use sophisticated technology. Even their clothes are quite modest made of natural ingredients and fabrics. In fact, the women don’t wear any bra! It is said those people were the descendant of a particular tribe/uma in Simatalu (a region located near to the west coast of Siberut Island). As the time went by, they spread throughout the island and split into several tribes. They are famous for several unique things and one of them is their tattoo.

Meeting Mentawai Tribe
Once tourists approach the locals, they might be astonished by their hospitality. The leader of the tribe might invite them into a Uma (a big local house made of woods). The length of such structure is about 25 meters and it has the width of about 10 meters. Some families may gather in that house as well in order to greet the guests. They also prepare local foods and present a unique entertainment especially the local dance.

Tourists can also learn more about both the culture and local attractions of Mentawai Tribe. For instance, there is the local belief called Arat Sabulungan. Arat means a ritual and Sabulungan means feathers. Most of the locals believe that everything in this world has a free spirit wandering in nature. Despite such majority belief, however, some locals have adapted several religions like Christianity and Islam.

The term of modesty is quite related to Mentawai Tribe. They wear traditional clothes and special ornaments. The men wear an underwear called Kabit, which is made of tree bark. They wear nothing as a garment, though. As for the women, they wear banana leaves crafted into a skirt. As mentioned earlier, most of them don’t wear a bra. For those visiting a settlement of the local tribe, they must be ready to get into the woods and explore it with the locals. Those people would teach visitors to go hunting, as well.

How to Get There
It is true tourists should do some efforts to reach the Mentawai Islands. From Jakarta, they can take an airplane and reach Padang City. Once they get there, the next transportation to use is a speedboat or other types of boats in either Bungus or Muara Port. The tribe lives in several parts of the islands, in fact. Thus, tourists can choose any island including Sipura, Sikakap, Pagai, and Siberut.