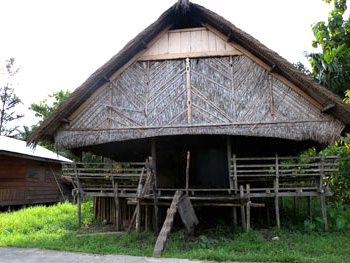 There is a recommended village to visit in Mentawai District called Madobak. Many tourists have recognized the charm of the village, especially for its traditional culture. Some people are also interested in visiting Madobak for its natural bath. Even though it is not an official tourist spot, the village has obtained its fame from both local and foreign tourists. The location is considered easy to reach as it only takes a speedboat from the capital of Mentawai. The village has been the part of tourism industry along with Matotonan and Ugai in that area. No wonder, it provides a wonderful experience for everyone either passionate travelers or occasional ones.

The Nuance
Once tourists arrive at the village, they may feel a refreshing nuance and a solemn atmosphere. No wonder, Madobak often becomes a destination for relieving fatigue and stresses. Surrounded by lush nature and a traditional community with its unique houses and traditions, it is a worthy place to visit. It resides near to upstream of South Siberut, after all. Some local shamans are often seen in that area as well. Not to mention it is located near to a famous waterfall called Kulukubuk!

Exploring Madobak Village
The main charm of Madobak Village, like the majority of the villages in Mentawai, is the local culture. That means visitors have the chance to enjoy uncommon entertainment performed by the locals. For instance, a rare traditional ceremony is often done during a local wedding or among those who want to move to a new house. Such event definitely attracts tourists as it becomes a kind of entertainment for them. During the ceremony, a shaman conducts a ritual in order to eradicate bad spirits. For some tourists, it looks a bit creepy but entertaining.

The next thing to do in Madobak Village is to approach the villagers. Those people are open to visitors despite their principle not to adapt to any modern culture. They may introduce some local foods and show how to apply tattoos on the body too. Apart from those unique things, they have another unique culture, which is to carve their teeth. This makes their teeth look like those of the sharks! The entire procedure of such carving is definitely painful, which some tourists cannot withstand to watch.

Sago is the prime food source in Madobak Village and Mentawai. Due to this reason, tourists have the chance to enjoy such food and eat it together with the villagers. The other local foods to try are grilled wild boar, subbet, batra, and kapurut. All of them are worth to try so no one should miss them! As for the accommodations, tourists can either stay in a villager’s house or rent a room in nearby hotels/resorts.

How to Get There
Located in South Siberut, Madobak Village is quite reachable. From Padang City, tourists can simply take a speedboat and head to Tua Pejat City (Sipora Island). Next, they need to take another boat to Siberut which is usually available on Thursday.